I suspect many readers will be wondering why the polls have been so volatile during the course of this campaign.  Today sees Fine Gael re-gain much of the vote share it had lost in the polls published over the previous week and a half, with a 4% gain in less than a week.  So what on earth is going on?

The reality is that many voters are simply not clear how they are going to vote, even at this late stage, and have been changing their minds over the course of the campaign.  Very rarely have RED C seen the level of undecided voters fluctuate so much from one poll to the next.

The normal process is for people to gradually make up their minds as the election campaign progresses, but that simply isn’t the case so far in this election.  This in itself makes a big difference in the vote share for one party or another, as those people who “partially” make up their minds from being undecided in one poll, are not doing so uniformly and up to now have tended to move in between the undecided and Independents/other party groupings.

This volatility among the undecided or “partially decided” voters gives us pollsters a major headache!  Despite only small shifts in core vote share for parties, shifting undecided voters can have a far greater impact on the overall final vote share of those expressing a preference.

Having told us who they were going to vote for, in today’s poll we asked voters how sure they were about this choice.  Only just over half (56%) of those certain to go and vote were completely decided in their choice, with a further 27% pretty sure they wouldn’t change their mind.  This however means that almost 2 voters in 10 (17%) who were telling us they would vote for one party or another are suggesting they may well change their mind.  In fact 12% claimed that they thought they would vote for the party they told us, but hadn’t really decided yet, while 5% were totally unsure of their choice and had just suggested who they might vote for. 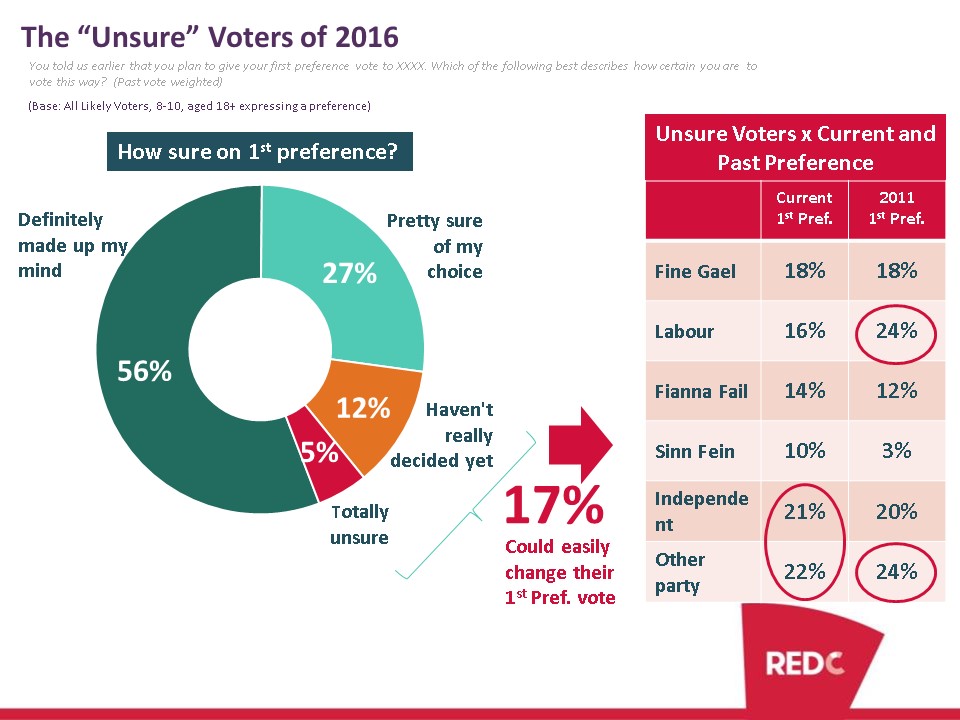 Add those who say they are unsure of their choice to those who wouldn’t even make a decision at this stage and that leaves about 1 in 4 voters who could change their mind.  As you can imagine, it is a major problem predicting an election with that much possible variance going on! So what can we garner from those possible switchers current or past vote behaviour?

The most secure vote is for Sinn Fein who have very few voters (10%) who suggest they will change their mind. On the other hand it is clear that those who currently say they will vote for Independent Candidates and smaller parties are much more likely to say they may change their mind, with over 20% of these voters suggesting they were unsure of their choice.  This further backs up the volatility of this broad grouping that we have witnessed during the campaign polls, switching between this grouping and being undecided.

Current Fine Gael voters are also more unsure, which makes sense given we have seen their vote also fluctuate more than others.  Finally those who voted for Labour in the 2011 General Election also very likely to be unsure of their current choice, with 1 in 4 (24%) suggesting they may change their mind, and these voters are currently most likely to have moved to Independents/Others.

This suggests there is still plenty of potential for fluctuation in vote share between now and the election, with the most likely movement in either direction between Labour/Fine Gael and Independent candidate/other parties.

For more information on how we conduct our polls:

« Newstalk Poll – Half of voters claim no benefit from two tier recovery Wisdom of Crowds – Are there “Shy voters” in GE16? »
Top...
We use cookies on our website to give you the most relevant experience by remembering your preferences and repeat visits. By clicking “Accept”, you consent to the use of ALL the cookies. However you may visit Cookie Settings to provide a controlled consent.
Cookie settingsACCEPT
Privacy & Cookies Policy