Wisdom of Crowds – Are there “Shy voters” in GE16?

Much has been made of the possibility in the UK of shy Conservative voters in the recent UK Election, who didn’t tell the pollsters they were going to vote Tory.  This phenomenon was also identified as being at play most recently in Ireland during the Same Sex marriage Referendum, where it was clear that people who ended up voting No felt under pressure not to admit this to pollsters in the run up to the campaign.

In that referendum RED C used a process called the Wisdom of Crowds in order to try to get behind the shy voter issue.  The process involved asking people, who by then had spent time with family and friends discussing how they would vote, what they thought the outcome would be, rather than how they would vote.  This allowed us to identify the fact that people felt the No vote would be higher than voters were telling us in the standard polls.  In the end the process was incredibly accurate, and predicted the outcome of the referendum with 100% accuracy, while the standard polls, while predicting a clear Yes vote, were actually on average 7% wrong.

There isn’t any particular evidence in this General Election that any Shy voters exist, but they certainly have done so in the past, when voters at the last election clearly didn’t tell us they would vote for Fianna Fail in quite the numbers they did.   It is quite conceivable that there may be some “shy” Fianna Fail voters still out there, or even some shy Labour or Fine Gael voters, as both parties have had the brunt of media negativity having been in government for the past five years.

In order to try and see if this might exist, as well as asking how they would vote, over last weekend we asked voters to predict the outcome of the election.  Firstly we reminded them what the vote share was in 2011, and then we asked them what they thought each party would achieve in terms of first preference vote in this election, based on the conversation they had been having with friends and family.

The results are very interesting in analyzing the difference between projected and claimed vote share.  They firstly suggest that people expect Fine Gael and Sinn Fein to achieve pretty much the same vote share it obtained in this poll at 30% and 16% respectively.  The big differences appear to be for Labour and Fianna Fail.  The crowd predicts that Labour will secure 13% of the first preference vote, significantly above where they currently stand in the polls at 8%.  At the same time the Crowd predicts that Fianna Fail will secure 21% of the first preference vote, again significantly above their current standing of 18%. 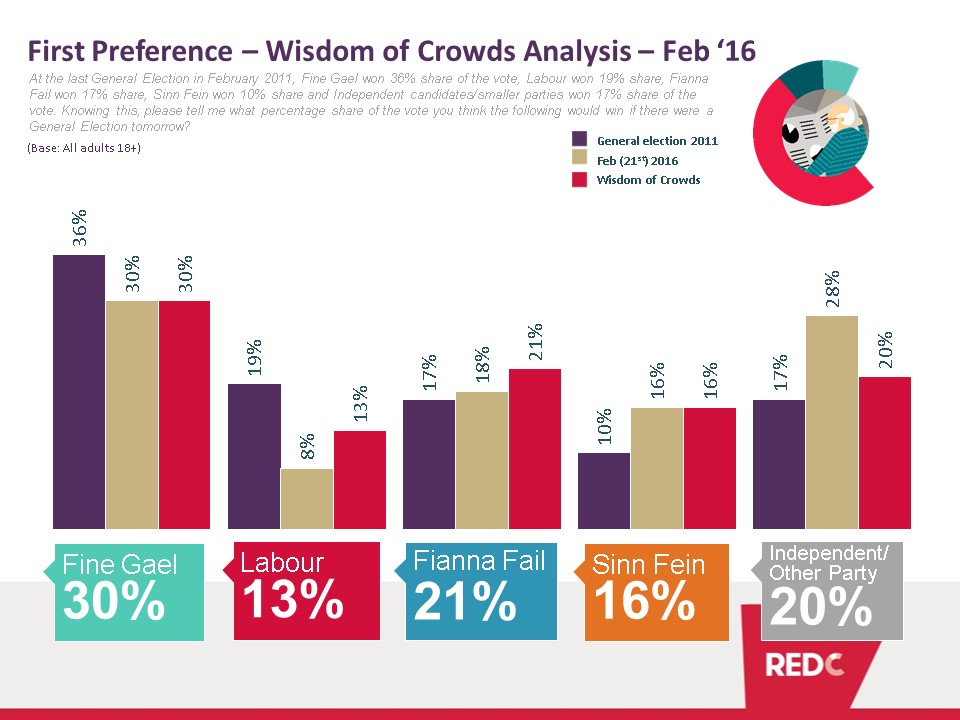 This would suggest that if anything, there may well be shy Fianna Fail and Labour voters, with Independents/other parties losing out.  More importantly this potential for gains among those parties is underlined by the fact that undecided voters are even more likely to believe there will be higher Fine Gael, Fianna Fail and Labour share of the vote come Election Day.

Time will tell if the Crowd are wise enough at this stage of the campaign to predict the election better than the collation of the preference of voters themselves, or if this is the same as predicting the outcome of a referendum, but the findings do at the very least suggest that there might be a shy voter effect at play.