The first Sunday Business Post RED C poll after the summer break shows little significant change in voter support across the parties, since the one conducted two months ago.  Little change in the current scenario is however quite significant in itself, as there appears to be little incentive for any one party or group of individuals to “rock the boat” and bring the new politics government formation to an end. 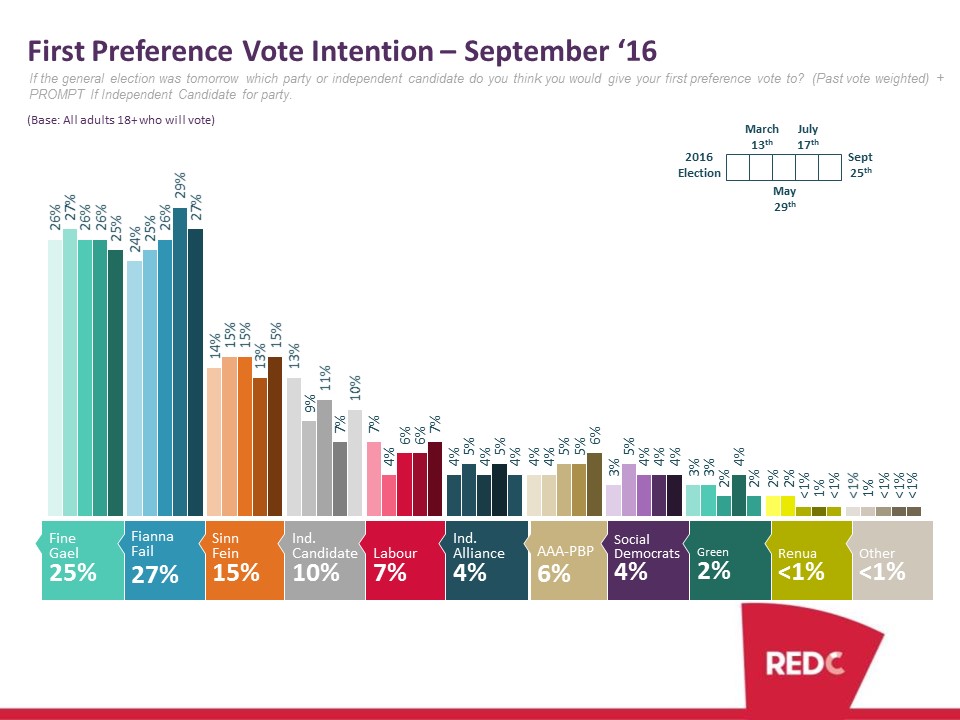 Fianna Fail remain the largest party based on first preference vote support.  However the level of that support has fallen back slightly since July, falling from a high of 29%, back to 27% in this poll.  They remain the largest supported party, as Fine Gael support also falls back slightly from 26% to 25% over the last two polls.  But this means that the gap between the two main parties is still very tight, at just two percent.  It also suggests that the momentum towards Fianna Fail that had been apparent since the election has now come to a halt.

Should the party have seen continued momentum in support at the expense of Independents or even more so at the expense of Fine Gael, and there may have been calls within the party to bring the current tacit support for the current government to an end and head toward another general election.  For now that prospect appears to have been put on hold at least for another short while.  If an election were to be held and these poll result came about, then we would be in a very similar position to now, and left with difficult position for any party to form a very stable government.  It is likely that Fianna Fail will be looking for at least low 30% in the polls before they think about pulling the plug on the current government, or at least evidence of continued momentum of support towards the party.

Likewise the Independent Alliance are unlikely to collapse the government while their level of support is retained at a similar level as seen in the last election among the electorate.  Currently the group is securing between 4 and 5% of the vote in the polls since the election, and they do so again in this poll, with a 4% share of the first preference vote.  If support is retained at this level there again appear little reason for these individuals to consider bringing the government down and losing their cabinet seats where they can make a difference.

The reason for the somewhat static nature of support in the three main protagonists holding the current government in place, has been gains for some of the other parties who are either not in government, or seen to be supporting the government.  Looked at individually these gains all appear to be relatively small movements, but when looked at in total as gains for all those not in government, they are perhaps more significant.

Sinn Fein sees support rise back up 2% to secure 15% of the first preference votes in this poll, a level they had been polling at since the election, apart from in July.  The other Independent candidates outside of the Independent Alliance also regain lost support over the summer.  They had been trending downwards since the election to as low as 7% in July, but they regain 3% of that lost share in this poll, to get back to 10% share overall.

Though not to the same degree there are also rises in support of 1% for both the Labour party to secure 7% in this poll, and AAA-PBP leaving them securing 6% support.  At the same time the Social Democrats retain 4% support, despite losing one of their high profile leaders Stephen Donnelly, in between this and the last poll.  The Green Party do however see support fall back by 2% since July, while Renua fall back to less than 1% support.

Overall the net gain for non-government or government supporting parties is therefore +4%, with those in government or supporting the government falling by of course the same amount.  Not a massive trend, but possibly a significant one, as these gains for the opposition parties appear to have effectively helped to secure the current government formation for the moment anyway.

For Fianna Fail the challenge is whether they can extend their support further as an “opposition” party, while still effectively supporting the current government from the opposition benches.  The upcoming budget will be an interesting test of how the public react to their holding the government to account, while supporting the budget as agreed in their accord with Fine Gael.