Sinn Féin are the big winners in our poll today.  Their strong tactics in opposition are clearly hitting home, and a consistent time as the lead opposition party is helping them build support further among a wider group.

The result is that the party has hit the heights of 30% first preference support in the poll today.    The highest level of support seen for the party in RED C polls since we started polling in 2003.  In the past month this represents a further 3% rise in support, on the back of gains the party has seen since securing 25% in the last general election. 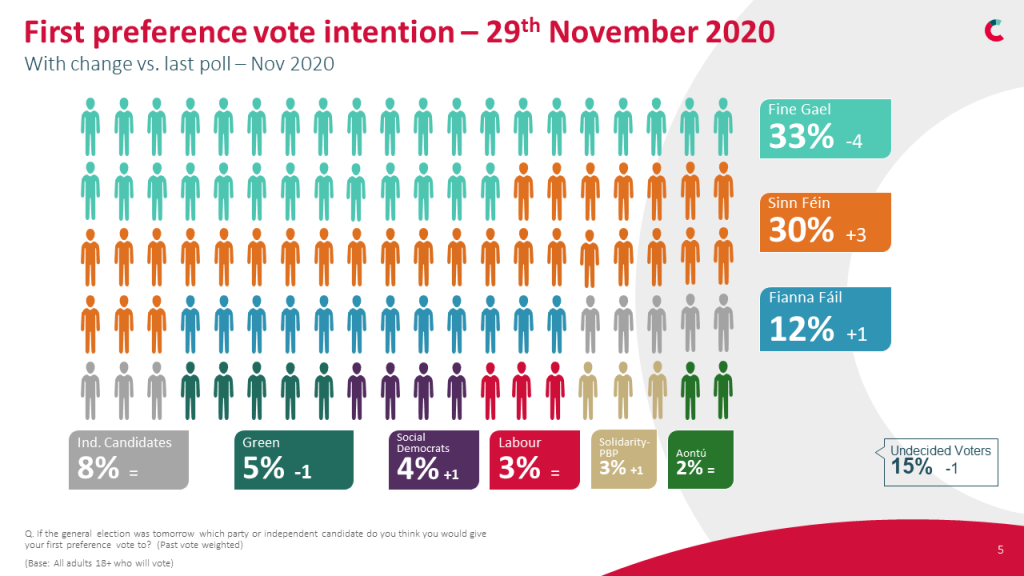 How secure are these gains?  Well support for the party is no longer dependent on a specific section of the population.  Instead support is now widespread, and across all demographic groups within the population.  The party secures over 40% support among all “younger” age groups, form 18 year olds right up to those aged 44; providing it with a very solid base for the future.  However support now extends beyond the young, boasting 33% first preferences among 45-54 year olds, and only dropping off among those aged 55+.

In light of such strong gains for Sinn Féin, you might assume that Fine Gael is in decline?  Well it is. From the highs of the last poll, the party’s support has dropped by 4%.  However, the 37% share the party secured at that point, was the strongest support they had seen for some time.   As a result, Fine Gael still secure 33% of the first preference vote in this poll, a very strong showing when compared to the 21% they secured in the last general election.

Fine Gael support however is much older.  Their strength in support is particularly seen among those aged 45+, and they are currently being given first preference support by almost half of all those aged 55 and over.  They need to do more to persuade the younger age groups that they are worth backing. 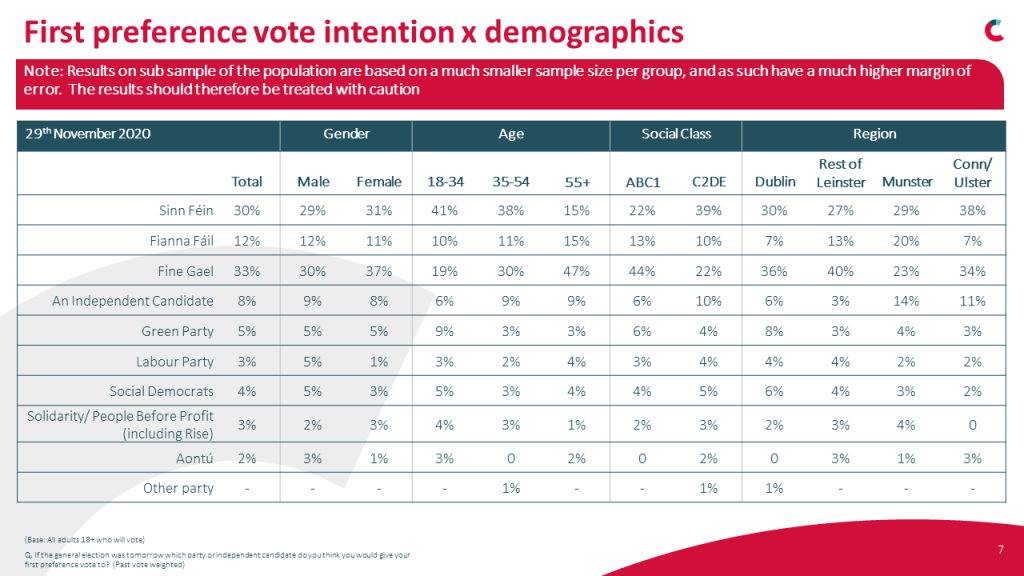 The current coalition situation, with the old major parties of Fianna Fáil and Fine Gael in coalition for the first time, and Sinn Féin the lead opposition party, appears to be driving party support to be heavily focused on these two competing parties.

This was the scenario feared by those in both Fianna Fáil and Fine Gael camps, when the idea of the grand coalition was considered.  Current polls suggest it is beginning to come to pass, with Fine Gael and Sinn Féin, often seen at either end of the political spectrum, gaining in support.  While the other parties get squeezed, most crucially Fianna Fáil.

Support for Fianna Fáil remains heavily depressed when compared to the past, and even in comparison to the support the achieved only 10 months ago in February.  Today they have at least made a small gain to 12% support, but this remains 10% behind the first preference share they achieved in the election in February.

Given that Fianna Fáil has not had any major negative issues to deal with directly in the recent past, and that Fine Gael are hardly having an easy ride over the appointment of Judge Wolfe in the past week, it is hard to know how the party can regain an individual and strong brand position among the electorate.

It is clear that they need to reassert their own position as a separate and different party to Fine Gael among the electorate, that voters can support and still ensure Sinn Féin don’t secure power.

Of course, there is no immediate danger of an actual election on the horizon, and given that a relatively large proportion of former Fianna Fáil voters are undecided at present, there is every chance that their fortunes could improve when people had to make hard choices in a polling booth.  It is clear however that for now, Fine Gael are playing the grand coalition game better than their partners.

For the smaller parties, the worry is that they begin to get squeezed as the battle intensifies between the two larger parties.  It has been a long time since we had two major parties on 30% of more, and that leaves less voters to spread around.

Those likely to vote Independent and Green have already been somewhat squeezed, and as the battle intensifies between the two larger parties, this squeeze could continue.  So, it will be vital for those smaller parties moving forward, that they continue to persuade people that a vote for them is worthwhile.

There were many who felt the grand coalition might change the face of Irish politics for good.  It certainly appears to be having a significant impact already.