In our analysis of the election and the polls we conducted, one area we were keen to understand was the impact of any campaign or late swing towards Fianna Fáil in the final week of the election.  In the past two weeks we have re-contacted a representative sample of 1000 voters that we interviewed in the run up to the election.  This exercise is very useful, as it allows us to compare the party they said they would vote to before the election, with the party that they actually ended up voting for.

By weighting the actual vote behaviour exactly to the result of the election itself, we can then clearly see the difference between this and how they claimed or expected to vote in the run up to the election.   If the pre-election results are very similar to the final result then we know there was a problem in the polls themselves, while if they are different we can assume that people changed their mind in how they would vote in the final weeks.

The first thing this analysis backs up is the volatile nature of the electorate during this election.  At least 1 in 5 voters changed their mind, and ended up giving their first preference vote to a different party to the one they said they would vote for during the campaign.  This backs up the evidence we had seen before the election that many people simply didn’t know how to vote and only really made up their mind in the final few days.

Much of this movement between parties and candidates cancels itself out.  If all the people that changed their mind moved randomly and equally then the net result would be little difference. Polls also generally assume that those who remain undecided will end up voting in similar proportions to those that declare a preference.

However if the trend in floating voter movement is even slightly biased toward one party in particular it can have a significant effect.  It is clear in this case that Fianna Fáil disproportionately picked up votes during the final weeks.  The main reason for this appears to be in the balance of votes that both Fianna Fáil and Fine Gael secured from people who left other parties or were undecided, but ended up voting for either of these two parties. This ratio makes all the difference to the overall gap in the share of the vote between Fianna Fáil and Fine Gael.

Fianna Fáil firstly won the battle for undecided voters, with 30% of all undecided voters before the election ending up voting for the party; while only 22% ended up voting for Fine Gael.  A complete reverse of the proportions that declared their vote intention prior to the election.  They also won among switchers.  In particular those who were seen to move away from Sinn Fein during the course of the election campaign, among whom Fianna Fáil picked up 4 votes for every 1 vote Fine Gael secured.   Similarly they secured a higher ratio of Independent voters, with Fianna Fáil securing 2 votes among this group for every 1 vote Fine Gael secured.

This certainly appears to back up the fact that the campaign was incredibly important for both parties.  Fianna Fáil had a good campaign and as result picked up a disproportionate share of floating voters; while also having the most loyal pre-election supporters of all the main parties. Fine Gael simply didn’t secure enough of the floating voters, and loyalty among those that declared for the party in pre-election polls was also not as strong as for Fianna Fáil, leading to a net loss of overall support and suggesting a relatively poor campaign. 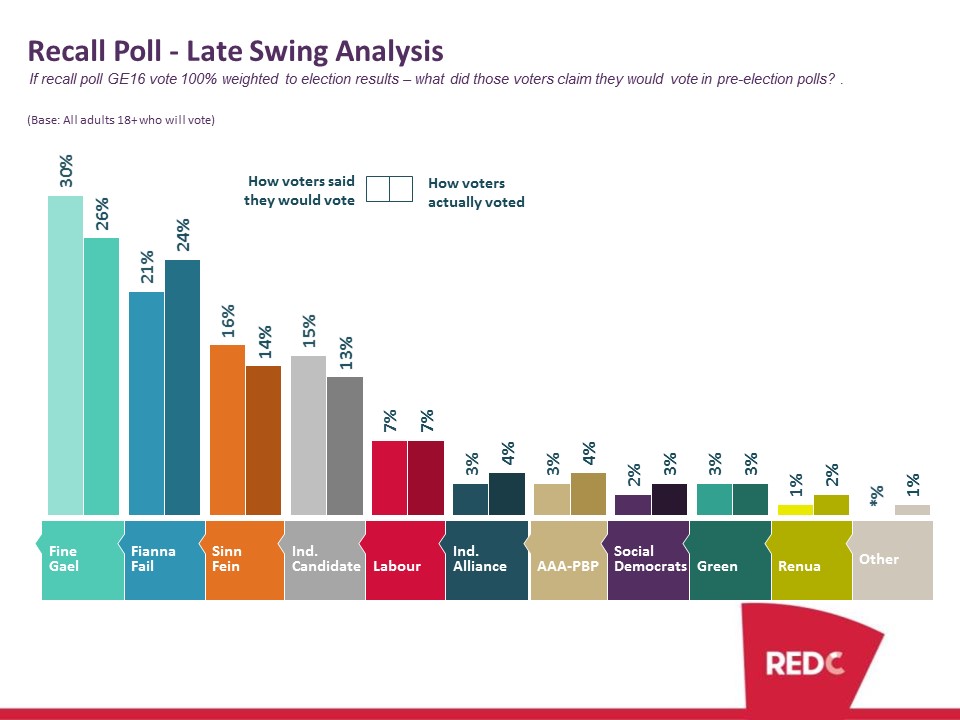 The recall poll analysis suggests that this swing from pre-election vote intention to actual vote behaviour accounted for around a 3-4% switch in the parties’ fortunes.  In other words the pre-election poll of polls average showing Fine Gael in and around 28-30% was actually pretty accurate, and they then lost share in the final week.

The same data does however suggest that Fianna Fáil should have been recording around 21% on average of the first preference vote across the pre-election poll of polls. This is slightly above that recorded in RED C campaign polls, which showed the party securing 19% on average, and even ahead of our final poll which showed the party securing 20%.   Evidence that we have work to do in order to overcome this 1-2% under representation in the Fianna Fáil vote, by ensuring that we find a way to capture these “elusive” or “shy” Fianna Fáil voters.

Using the Wisdom of Crowds approach to help to uncover “Shy” voters did boost the Fianna Fáil vote to about the right level, but at the same time also boosted Labour support and reduced Independent support, both of which would have been incorrect.  As such, since the election we have spent time analysing the data from polls conducted before the election and also run two recall polls, in order to understand where and why we are missing some Fianna Fáil voters, and so ensure that moving forward we better capture the elusive or shy Fianna Fáil voter in our polls.

Any pre-election poll can only tell you how voters think they will vote at the time they were questioned, and as such their perceived accuracy is at the mercy of any change in vote behaviour after that time.  Most were completed around a week before Election Day, after which time 20% claim to have made up their minds.

Clear evidence of late swing therefore provides the answer to some of the error in pre-election polls.  At the same time it is also clear that we need to better understand why polls are currently somewhat under-representing the Fianna Fáil vote, and adjust methods to ensure this doesn’t add to any error in the future.