Another poll, another decline in support for the government. While water charges have most certainly been a catalyst for upset, it is apparent from this poll that the disconnect between a clearly improving Irish economy and the day to day finances of everyday voters may be at the core of the discontent.

Fine Gael support continues fall again in December, if only marginally this month, with a drop of 1%. The resulting trend however has seen the party decline in every month since before the first non-austerity Budget for years in September, with the overall impact being a fall of 7% support in just three months. 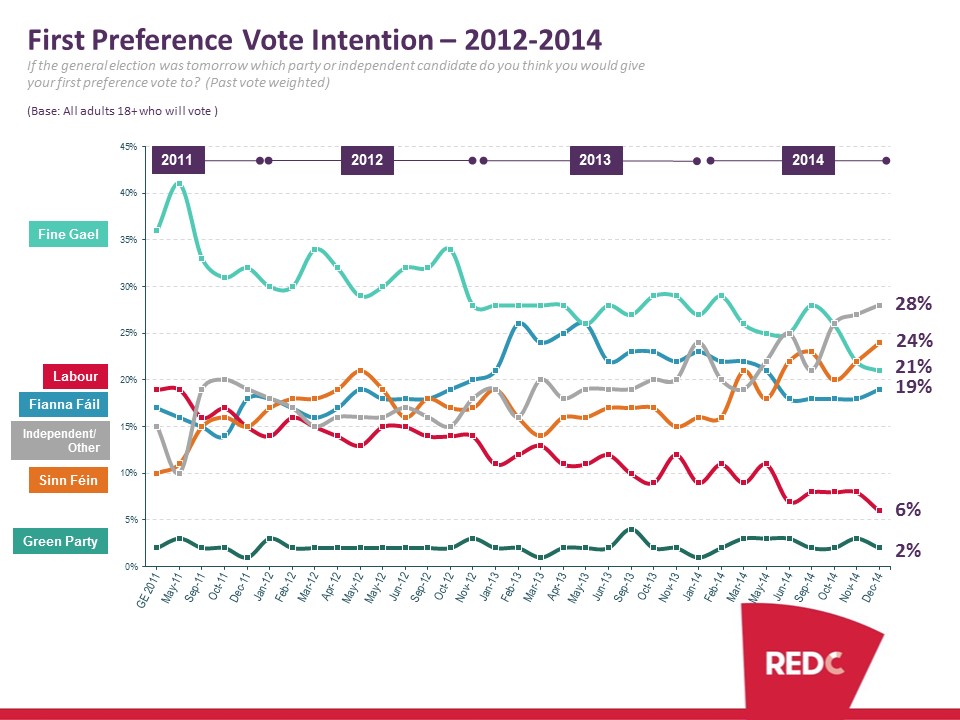 While Labour had somewhat avoided association with the negativity surrounding the water charges and had seen steady if low support during the same period, that has now also come to an end. In December support for the party has declined again down to 6%, the lowest standing for the party in a RED C poll for 10 years.

How the government must now be cursing moving the Budget forward in the year to October? While this was move was prompted by the EU requirements for pre-budget information in October, the move was widely welcomed by many in Government, suggesting it would bring clarity to voters in December and reduce fears of the budget on crucial December spending.

The reality is that it is the gap between the budget itself and the implementation of the improved tax measures that only come into place in January that appears to be doing the government no favours. This is characterised by the fact that the majority of voters still simply haven’t see any personal improvement in their finances despite an improved economy. Only two in every five voters feels that the recovery has benefitted them personally, leaving the majority (60%) with no apparent personal improvement from the recovery. Of course this is because for most voters any economic improvements would come from the measures taken in the budget that simply have not been implemented yet. It is only among the youngest age groups at college or in early working life where more than half feel the recovery has impacted on them.

The result is that voters are far less inclined to trust the Government parties to manage the public finances, a measure that has regularly been seen to closely correlate with government support. Pre Budget 2014 the government had one of the highest economic competence ratings among voters for some time, with 40% of the electorate suggesting they trusted Fine Gael and Labour to manage the public finances. Three months later that economic competence rating has fallen by 7%, with just 33% now trusting the government parties. Trust has particularly fallen back among women, those in 45-54 year old age groups and among current Fianna Fail and Sinn Fein supporters. It is also clear that Labour voters have less trust than their partners in government, as apart from Sinn Fein voters, they are most likely to feel the government has not been doing a good job managing the economy.

Likewise the proportion of voters that believe the country is on the “right track” has also declined significantly. Prior to the budget the majority (61%) felt the country was generally on the right track, now this has fallen back by 7% to just over half (54%). Older voters are those most likely to have changed their view, as well as women those living in Dublin and of course Sinn Fein voters.

The clear correlation between economic competence and voter support means it is vital for the Government parties that they regain lost ground here. The question is whether the delay between announcing the budget, and the measures actually coming into effect, has in itself lessened the impact they may have on voters when they do eventually arrive in their pay packets.
Sinn Fein will be sincerely hoping that the impact has been lost, or can be countered, as in the midst of this turmoil their support continues to climb gradually ever higher.