Home  ❯  Articles  ❯  Support for the idea of a United Ireland, but not the Reality

Support for the idea of a United Ireland, but not the Reality

With polls currently suggesting that Sinn Fein may be the largest party in the state at the next election, the question of a United Ireland has come even more into focus, as it is a central part of their platform.  Brexit and the Northern Ireland protocol have also pushed the agenda of the possible benefits of a United Ireland, but to what extent do the public really support the realities of what a United Ireland may entail?

Our deep dive poll into the topic suggests that while the public are very supportive of the ideal of a United Ireland, this appears to be as a very superficial level, and the reality is they don’t support much of what a United Ireland may well entail.  There is certainly still a significant job to do to bring voters along the journey and educate on the realities.

Overall, the majority of voters support the concept of a United Ireland in name, with 60% suggesting they would vote in favour of United Ireland in any Referendum here in Ireland.  This grows further when undecided voters are excluded, with 70% of those that express a preference in support.  Younger voters and those living in Connaught/Ulster are most in support, while less than half of those aged 65+ support the idea. 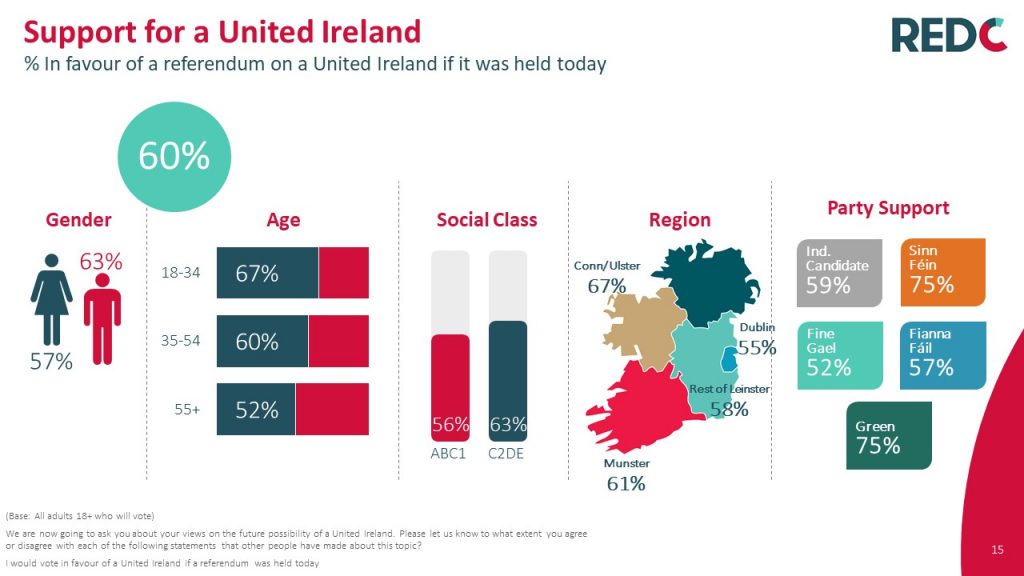 However, when prompted on the realities of a United Ireland may mean for those living here in the Republic, the divorce from reality for most is telling. 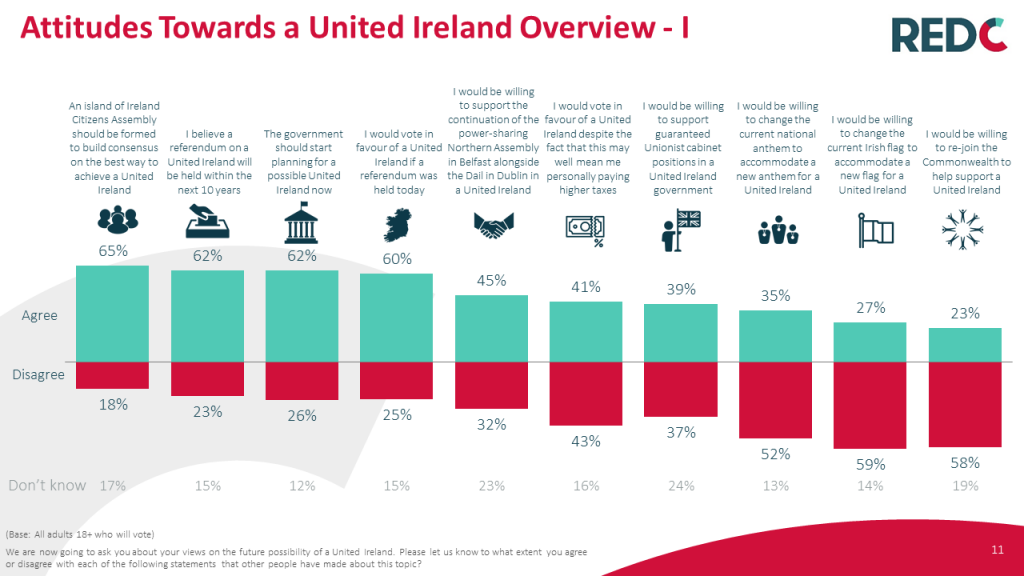 To make a United Ireland work, the reality is that there will need to be changes and compromises about symbols and structures, to provide for the views of all citizens in that new entity.  However, most voters here are currently loath to lose the symbols that represent the Republic of Ireland.

Outside of symbols, the citizens of the Republic of Ireland are more divided about making compromises with regard to representation and membership but appear to be generally against this as well.  The Irish public are pretty evenly split on being asked to provide guaranteed seats at cabinet for Unionist parties, but most (59%) are against re-joining the commonwealth as a gesture to help support the process.

The juxtaposition between desire and reality is most heavenly seen among Sinn Fein voters, who are most likely to be in favour of the concept of a United Ireland, but also the least likely to support compromise in terms of symbols, representation, and membership.

Currently the party has strong support in the polls, again recording 33% first preference vote share this month, leaving them some 11% ahead of Fine Gael at 22% support and 18% ahead of Fianna Fail at 15% support.

Much of this support is based is focused on those aged under 45, who are both most likely to support the ideals of a United Ireland without accepting the possible compromises. This seemingly populist support can be as easy to lose as it is to attract.

To keep a United Ireland on the agenda, they will certainly need to educate on the compromises that may come with that ideal. The Citizens Assembly certainly appears to be an ideal vehicle for this process.