Home  ❯  Articles  ❯  No summer break in pressure on the Government

No summer break in pressure on the Government

In years gone past, government TDs used to look forward to the summer break from the Dáil. This was because for the most part the focus came off what they were doing in government for a while, and so the pressure came off them too.

That is unlikely to be the case this year however, as voters will be continually reminded of the biggest issue they have right now in cost of living pressures every time they fill up their petrol tank, get their latest energy bill, or get bill shock when they do their grocery shopping.

Cost of living and housing dominate the agenda, and it’s difficult to see how the government can react at the speed voters want them to.  While it makes sense in government circles to deal with taxation and social welfare at the time allocated in the budget as it would normally be done, this is unlikely to wash very well with the cohort of voters who are already frustrated with the length of time it takes for government to get anything done. “Why wait three months to help those struggling, when action could be taken more quickly”, as far as the disaffected voter is concerned?

This chimes with the views of many of those who are now supporting Sinn Fein.   On the whole, they often express the view that they are fed up with what they see as lack of speedy action in areas like housing and health in the longer term, and now the cost of living in the short term.   We also know that those impacted more by the cost-of-living crises correlate strongly with support for Sinn Fein.

It’s no surprise then that despite significant media coverage of those in government parties, it is Sinn Fein that remains in a very strong position. Once again, the party secures 36% of the first preference vote in today’s poll the same as that seen in May.

Today’s poll also sees small gains in support for those parties perhaps seen to be more on the margins, often seen to stand for people who feel they don’t have a voice. Both Solidarity People Before Profit and Aontú aim to secure gains and support in today’s poll. Perhaps a further reaction to those severely under pressure as a result of the cost-of-living crisis. It is interesting that it is these parties as opposed to those more established parties on the left such as the Social Democrats and labour who made gains.

It is also clear that in the current cost of living crisis, any idea that voters would be swayed by strong talk about defending the Northern Ireland Protocol, is unfounded in any case.  The majority of Irish voters clearly believe that the British Government is being dishonest, and in this situation a strong defence of Ireland as seen in recent weeks by the Taoiseach, might have prompted a small rally round the flag effect. 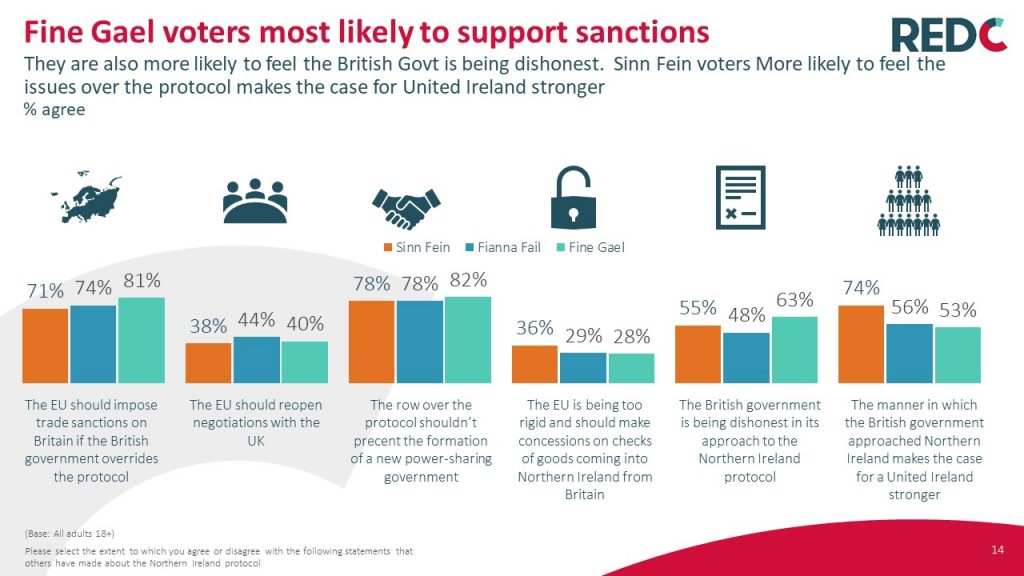 But it certainly does not appear to be the case right now, and this appears to be because voters see the Protocol issues as much further down the list of issues they are concerned about, compared to issues such as the cost of living or housing.

Partly this may be because many voters are not clear about the issues around the protocol and what it means for them.  On all the questions we asked about the protocol at least 1 in 5 didn’t know how to respond.   In this context around of third of voters in Ireland are prepared to suggest that negotiations should re-open and that perhaps the EU is being too rigid.

In any case, being seen to be tough on the British government at this time doesn’t appear to win over voters but may appeal to the core still voting for Government parties.  While waiting for action on the cost of living certainly doesn’t win back those already disaffected with the establishment.

« Most in Ireland blame Russia for the war in Ukraine Sustainability in the UK is taking a back seat as the cost-of-living and energy crisis dominate societies agenda »
Top...
We use cookies on our website to give you the most relevant experience by remembering your preferences and repeat visits. By clicking “Accept”, you consent to the use of ALL the cookies. However you may visit Cookie Settings to provide a controlled consent.
Cookie settingsACCEPT
Privacy & Cookies Policy