Our final poll before the Same Sex Marriage Referendum suggests that the vote will be passed, albeit by a smaller margin than we had seen earlier in the campaign. The expected shift towards the No camp, so often seen in referendum campaigns, is apparent, but not at a strong enough rate to suggest the vote will be lost. 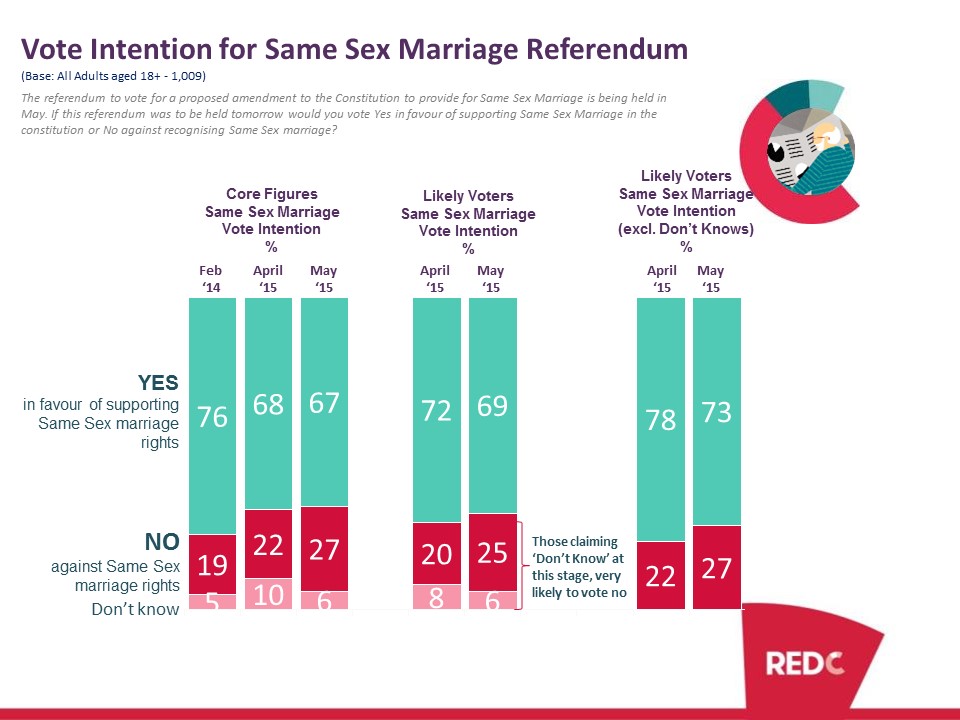 This expected shift in opinion has been born out to some extent over the past two weeks, with further movement of voters towards No or Don’t Know. As a result the Yes support has fallen back by 3% leaving the Yes vote at 69% before the undecided voters are excluded.

The No campaign as a result do have the momentum coming into the final week, with gains in support for the No side to 31%, coupled with D/K voters that appears to be breaking strongly towards the No camp. But our view is that the gains are possibly not enough at this stage to cause a serious threat to the referendum being lost.
Taken still a good week and a half before the vote itself, there is of course still room for a major event to change opinion, and any momentum is certainly with the No side. It is also crucial for the Yes vote is that younger voters, who appear to be far more likely to claim they will vote in this referendum, actually do end up voting. Having said that we would need to see a significant further shift in support of lack of Yes voters turning out, for the vote to be switch to the No side.
So what of the possible “Shy No” voter? The polls in the recent UK election once again showed us it is important to evaluate the possibility that some voters are avoiding telling us exactly how they feel, particularly if they are somewhat concerned about admitting to voting for one side or another.

In this campaign the No side have not been strongly represented, with no political party on the side of the No camp, and the media firmly in the Yes camp. So it wouldn’t be a surprise if voters were “shy” about telling us they plan to vote No. This is why in our view it is safer to assume that those claiming to be undecided are more likely to vote No.
In past polls we have also seen that many voters claiming that they will vote Yes do still have reservations about some of the claims being made by the No camp. To get behind this today we tried a different exercise, by testing a Wisdom of the Crowd approach to polling.

As well as asking how our representative sample of voters will vote themselves, we also asked them what they thought the final result might be. This is interesting as it tries to take into account the conversations that voters are having with family and friends about the topic, and how they see people voting on Election Day.

The Wisdom of Crowd approach sees voters estimating a 61% Yes and 39% No final result. This suggests that voters certainly do think the result will be closer than their own vote intention predicts, and indicates that there may well be a “shy No voter” effect in the top line poll results. Having said that it still predicts a win for the Yes camp, with even 54% of No voters predicting the referendum will be carried.

To sum up, todays poll does suggest that some momentum is with the No side, and that they may also be somewhat underrepresented in the topline poll figures. Despite that our view is that it is unlikely the momentum is strong enough or that the shy voter effect great enough, to make enough of a difference in the final week for the referendum to be lost. To this end we suggest the vote will be passed, but with a relatively small majority.