Fine Gael and Labour both make gains post Christmas break, with Fine Gael up 3% after several months on declines in the polls and Labour up 2%. However the government parties have more to do to prove even to their own supporters that they are the right party for their vote, with less than a third of those who give their first preference to Fine Gael saying they will definitely vote for them come the next election. 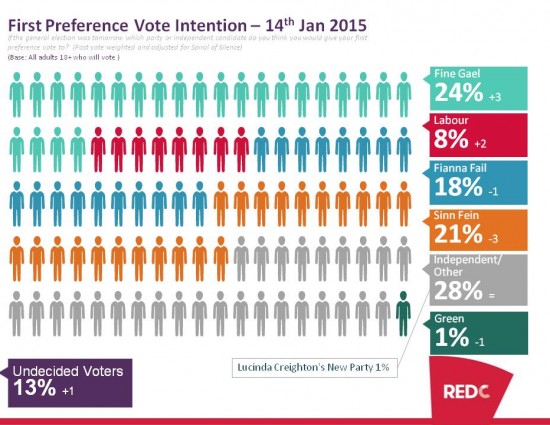 Independent candidates remain in a very strong position securing 26% of the first preference vote on their own, with other parties pushing this up to 28%. Support appears to be as strong for Independents than other parties, with 42% of those currently giving them a first preference vote suggesting they will definitely do so come the next election and only 1 in 10 suggesting they are particularly unsure of this decision.

There is also strong topline indications of support for an alliance of Independent candidates including Shane Ross and Michael Fitzmaurice, with 12% of voters suggesting they would definitely vote for this approach if candidates were available to them.
Sinn Féin support falls back somewhat, with the party securing 21% support in this poll, down 3% from that they achieved in December. At the same satisfaction with Gerry Adams as leader also declines from that seen last year. It is also clear that opinion on the party remains divided among the electorate with 52% of all adults saying they would never vote Sinn Féin.

Fianna Fail support is steady at 18%, with little sign of movement for the party. Satisfaction with Michael Martin’s also falls back, with the lowest level of satisfaction among party supporters of all the main party leaders.

Support for a clear alliance between Fine Gael and Fianna Fail at this stage however doesn’t appear to be any benefit to the parties, with just 15% suggesting they would definitely vote for such an arrangement. Having said that for 29% of Fianna Fail supporters the preferred coalition partners would be Fine Gael, and similarly 27% of Fine Gael voters suggested their preferred coalition partner would be Fianna Fail (though Labour remains a more preferred partner in government).

The great majority 80% of those that express a preference, continue to claim to support the referendum for same sex marriage rights, and with low levels of undecided voters this looks secure. However, previous work has shown that the electorate only really engage closer to the referendum and the result could still be closer than the current polls suggest.