“A week is a long time in politics.” Perhaps a somewhat overused quote, first uttered by British Prime Minister Harold Wilson, but it still very much holds true today. The past week of politics has had the potential to completely change the political scene again in Ireland. The release of the Anglo tapes in the past week coincided directly with the fieldwork on this poll, conducted between Monday and Wednesday this week. As such it provides a very clear measure of the impact, if any, their release has had on voter’s intentions, and likely party support.

The Anglo tapes clearly remind people of the events that led to Ireland eventually seeking the help of the EU and the IMF to bailout Ireland. Of course at that time Fianna Fail were in power, and by many closely associated and blamed for the bailout. So how do voters feel now that they are reminded of those events, and to what extent do the tapes implicate Fianna Fail in voters minds or instead lead people to more blame the bankers. 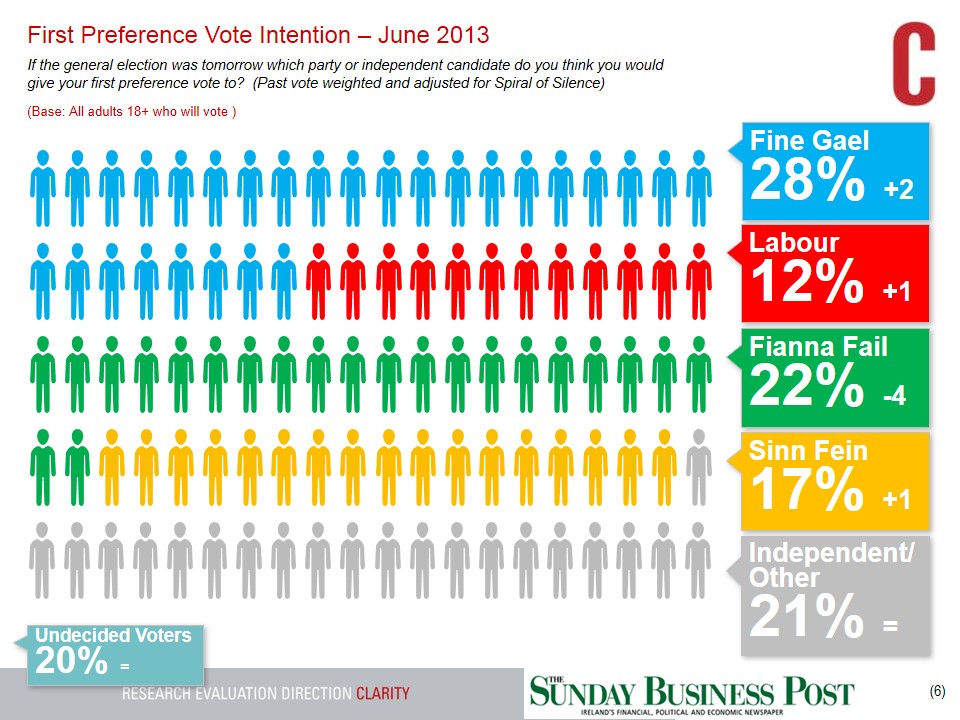 The impact based on today’s poll is to expose the fact that some of Fianna Fail’s recently recruited supporters are still not 100% sure of their choice. Support for the party falls by 4% in the past month, to leave them securing just 22% share of the vote. Wiping out all the gain they had made since January. However, this could potentially have been a lot worse, and my reading is that as yet the tapes have not damaged Fianna Fail as much as they might have done.

We ran a one off poll for another client two weeks ago, which suggested that support for Fianna Fail had already dropped by 2% before the tapes were released, most likely on the back of the expenses coverage around John McGuinness. As such that suggests the impact of the Anglo tapes is to only knock off a further 2% support.

Having said that it is still relatively bad news for the party. Only a month ago the party had consolidated gains over the last six months, and as a result move level on share with Fine Gael. With a consistent upward trend in support, it appeared likely that they would soon become the largest supported party in the state again. Now as a result of some bad coverage for the party the picture is very different. Fianna Fail losses have also led to gains for Fine Gael, whose support rises by 2%, to leave the party securing 28% of the vote. As a result the gap between the two parties has increased from level share to a 6% share gap.

Both Labour and Sinn Fein also makes some gains as Fianna Fail fall back, with each party respectively increasing share by 1%. This means Labour move up to, perhaps a more respectable 12% share of the vote, while Sinn Fein secure 17%.

While it is clear then that the release of the Anglo tapes has had an impact on the political landscape, it could be argued that it perhaps has not had as big an effect as might have been expected. Flanna Fail support has fallen back to 22%, but this is still 5% more than the party secured at the last election, despite the renewed spotlight on the parties past. This indeicates that at least half of the support the party steadily has won back since the election, are not so easily turned away from them.
So where has support been lost for Fianna Fail, and perhaps more interestingly, where has support been retained? Biggest falls in support come among women, and those possibly most likely to have mortgages in the 35-54 year old age groups.
At the same time, support among those in older 55+ age groups remains the same as it was a month ago, suggesting the reminder of the past by the release of the Anglo tapes makes no difference to their support. What this poll suggests then is that some of the Fianna Fail vote is fragile, but perhaps not as much as we might have expected, and the party has held on to some of the gains they made over the past year despite the heavy media attention on their past.

One final point is also worth making of significance in this poll. Despite the shift in voter support seen this month, there is once again no direct evidence that voters are clamouring for a new party. It could be argued that in the current circumstances, where voters have already switched allegiance from one party to another (in this case form government parties to Fianna Fail), it is unlikely that they will shift back to who they voted for last time. Instead, they will tell a pollster they simply don’t know who to vote for or vote for Independent candidates. In fact the same proportion of voters (20%) as seen in the past 3 polls remain undecided how they will vote, and this is no higher than seen mid term between elections on many occasions. As such past government party supporters who had “switched” to Fianna Fail, were quite prepared to go back to supporting government parties.