The difficulties in predicting many referenda over the last number of years has led RED C to investigate different ways to predict the outcome. The problems with predicting a referendum are twofold.

Firstly, the subject in question is often contentious and divides the population, meaning people are less likely to want to share their views.  The idea of “Shy” voters has been long examined in election campaigns, by a number of academics and pollsters. The theory is that sometimes a position or party becomes so against the general views of the media and society, that people become embarrassed to express the view that they support the said party or position. In this campaign the No side have not been as strongly represented in the media, with little political party support on the side of the No camp, and the media firmly in the Yes camp.  So it wouldn’t be a surprise if voters were “shy” about telling us they plan to vote No. This is why, in our view, it is safer to assume that those claiming to be undecided are more likely to vote No.

Secondly, there is the issue of the “status quo” effect.  A large part of the population is often not as interested in referenda as we may imagine, and often don’t really understand the reasons behind any change to the constitution.  When you don’t fully understand why change is suggested, and don’t feel the need to engage with an issue, why would you change the constitution?  It is far easier to leave the constitution as it is.  This “status quo” effect has been registered in many Irish referenda of the past.  The main impact on any polling analysis is that a much larger proportion of undecided voters tend to end up voting No than might be expected.  Voting No keeps the status quo of the current situation and removes any danger from a change that could impact on you personally.

These two factors make correctly predicting a referendum through standard claimed recall very difficult, particularly when 20% of the population remain undecided or won’t tell you how they will vote.  One of the tools we use to try and uncover shy undecided voters is called the Wisdom of Crowds.  As well as asking how our representative sample of voters claim they will vote themselves, we also asked them to predict what they thought the final result might be. This aims to take into account the conversations that voters are having with family and friends about the topic, and how they see people voting on Election Day.  It means we collect information on what proportion of their friends and family are saying to each other they will vote No, even if they won’t tell us directly.

The Wisdom of Crowds approach works best when families and friends are talking about a topic in detail, because that means our crowd is very well informed about how their friends and family might vote.  So, it worked very well in predicting the Marriage Referendum result, with 100% accuracy.  But not so well at the last General Election, when it appears that few people had worthwhile discussions with each other about how they might vote.  Based on the level of conversations people are likely to have had already in the run up to the abortion referendum, the approach should also work well in this referendum. 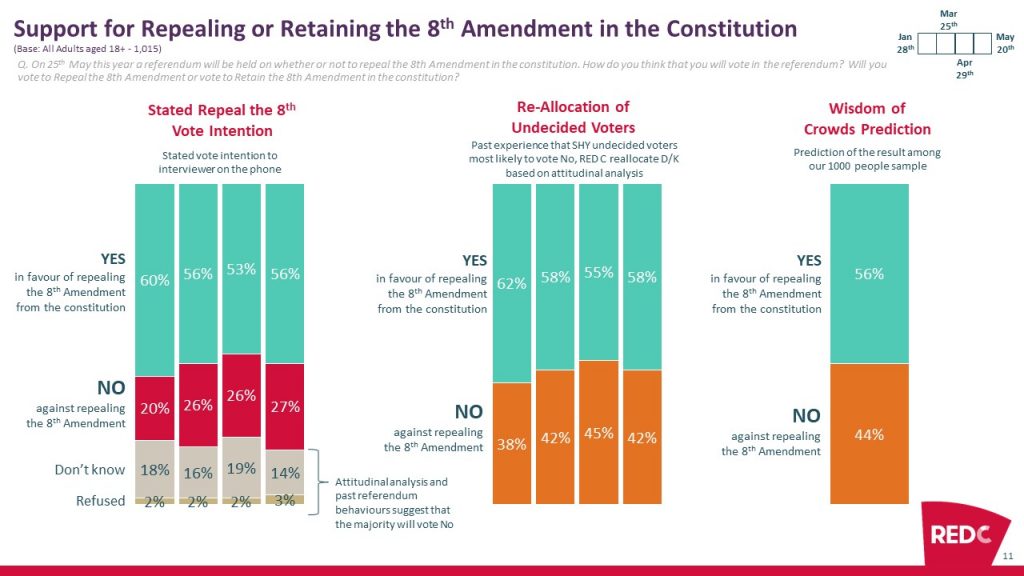 We therefore look to our Wisdom of Crowd analysis to help us understand the real dynamic behind claimed voter intention.  The Crowd predictions suggest a Yes vote of 56% and a No vote of 44%.  This is potentially a much closer result than suggested by the claimed vote intention, with a 11% swing from yes to No.  That tells us that despite our target suggesting they will vote Yes in greater numbers they are very conscious that many of their friends and family will vote No.  It gives further credence to our decision to allocate at least 80-90% of the undecided voters to the No camp.  Overall then we expect the Yes vote to be in and around 56%-58% at this stage, and barring any major interventions in the campaign over the next week that is the most likely result.  Still enough for the Yes camp to win the referendum, but closer than top line vote intentions suggest.

« The latest RED C/EU Movement poll shows that 92% of Irish people are in favour of EU membership. Polls predicted a Yes, some very accurately, but were treated with caution »
Top...
We use cookies on our website to give you the most relevant experience by remembering your preferences and repeat visits. By clicking “Accept”, you consent to the use of ALL the cookies. However you may visit Cookie Settings to provide a controlled consent.
Cookie settingsACCEPT
Privacy & Cookies Policy