Martin doesn’t do enough to save both seats, and Fine Gael take honors.

Since his election as leader of Fianna Fail this constituency focus has all been on Micheal Martin, and what he can do to hold up the share of the vote.  While he does manage to hold the Fianna  Fail share  at a higher level than seen nationally, it doesn’t appear as yet to be enough to save his running mate Michael McGrath from possibly missing out on being elected. 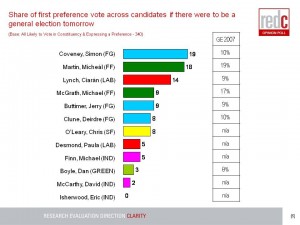 Instead it is Fine Gael who reap the dividends of an improved share, despite not making as good gains in first preference support as Labour overall.    The main reason for this is that Fine Gael appears to be more transfer friendly overall, than either of their main competitors.  Suggestions from this poll are that Simon Coveney will do very well, securing 19% and easily making quaota on the first count.  He then has a not insignificant surplus to pass on to his party colleagues. This puts them far enough ahead to hold out until Desmond is eliminated and take god transfers from her.    As such Deidre Clune looks like retaining her seat relatively comfortably in the final count, while Buttimer gains enough transfers from Chris O’Leary of Sinn Fein, to keep him ahead of McGrath in the final count.

While Martin does hold on to his vote it is at the expense of his Fianna Fail running colleague McGrath, who sees his first preference vote almost halved since 2007.  This leaves McGrath with an uphill battle to secure the seat, and as the party are now relatively transfer unfriendly, this poll suggest he may not make it unless the party work harder on vote management in the constituency.  Martin’s surplus is less beneficial than Coveney’s, and McGrath then struggles to pick up transfers from anywhere until the Sinn Fein candidate Chris O’Leary is eliminated.

Labour does retain a seat in the constituency through Ciaran Lynch; but the overall first preference vote for the party is at 18%, not far from current national polls, but a long way behind the highs of 27% seen nationally a few months ago.  That means that while Lynch gets good transfers and makes quota on the seventh count, his running mate Paula Desmond fails to receive any transfers of note and as such is eliminated on the eighth count.  There is certainly a job to do in the party to encourage voters to place their candidates on the ballot paper at some point, even if it isn’t first preference.

In contrast to the national polls this is one constituency where Independents don’t perform that well, perhaps due to Martin keeping votes more loyal to Fianna Fail. However they do improve their share vs. 2007.  Perhaps it is this gain for Independents that further impacts on Dan Boyle’s position, as he falls back quite heavily even vs. 2007, securing just 3% first preference in today’s poll.

All in all, while Martin has held up the Fianna Fail vote in the constituency it doesn’t appear as yet to be enough to save the seat for McGrath, and that is the key battle for the final week.  With Fine Gael needing very good vote management to secure all three seats on election day.