Home  ❯  Articles  ❯  Consumer Outlook is Up but Concerns over Brexit

Consumer Outlook is Up but Concerns over Brexit

The lastest RED C Consumer Mood Monitor from June 2017 shows a slight increase in consumer outlook for the Irish economy. This is the first increase since June 2015. More than 2 in 5 (42%) now believe the economy will improve in the next 6 months – this is up from 39% in January. 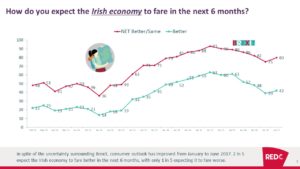 But Brexit remains a significant concern with 4 in 5 being worried that Brexit will have a negative impact on the Irish economy – this is an increase from the previous wave in January. 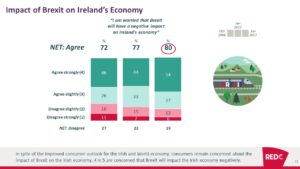 Consumers do not expect any change to their disposable income over the next 6 months and as a result spend intention remains stable for most categories. But consumers are expected to increase spend for entertainment/socialising. The weaker British Pound continues to impact Republic of Ireland spend but to a lesser degree than seen back in January. 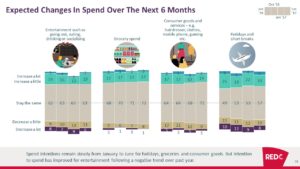 « More of a nudge than a bounce Who are Gen Z and what do they mean to market reserach? »
Top...
We use cookies on our website to give you the most relevant experience by remembering your preferences and repeat visits. By clicking “Accept”, you consent to the use of ALL the cookies. However you may visit Cookie Settings to provide a controlled consent.
Cookie settingsACCEPT
Privacy & Cookies Policy