With the European Elections just three weeks away the Sunday Business Post commissioned RED C to conduct a series of constituency polls across the three European constituencies. Below is are some of the topline results and conclusions from the polls, and the full report for download. It is clear that there is still a lot to play for in most constituencies, with probably only two to three candidates in a clear position to take a seat at this stage. 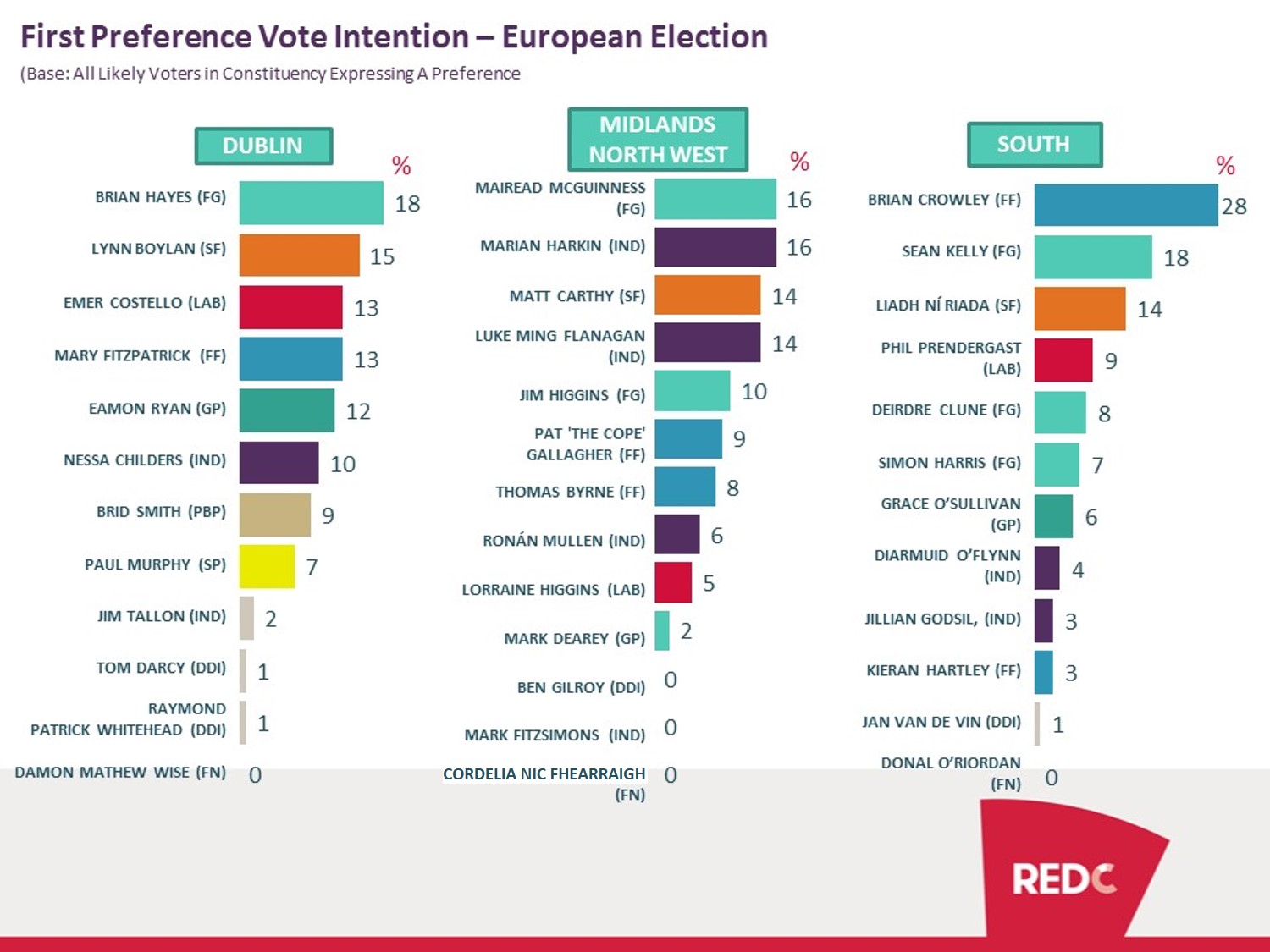 Has Gerry Adams arrest had an impact on the results?
The fieldwork for these polls took place between Mon to Thurs of last week. News of Gerry Adams arrest came out on Weds night. As such it could well have influenced the final days of polling. Looking at candidate support variances prior to his arrest and after to it is however inconclusive. In Dublin Boylan support does fall back after his arrest, however the reverse is true for Ni Rada in South, while Carty support is stable throughout. Differences therefore may simply be due to who we interviewed on those days.

Is there a possibility that Labour won’t win any seat?
There is still plenty of work for Labour to do in order to win any seats, but their position is perhaps not as bleak as some have suggested. In Dublin, Emer Costello is in the mix but has a real fight on her hands to win the seat; while in South, Phil Prendergast has an outside chance of taking the fourth seat after improving her position somewhat with media coverage of her stance against the party leader, Eamonn Gilmore. Lorraine Higgins is unlikely to take a seat in Midlands North West based on this poll. So while Labour may still not end up winning any seats, they are not out of the race just yet.

Who will the winners/losers be?
This depends on which constituency you look at, and shows how important the candidates themselves are in this election. Independent candidates could certainly be winners, with the real possibility of two seats in Midlands North West, and possibility an outside chance of a third in Dublin. Sinn Fein could also do very well having not won any seats at the last European Election they are in with chance of three this time, though all of them still require a fight. Fine Gael look relatively well placed to do OK vs the last European elections, though they may be down at least one seat. Labours precarious position means they could do poorly vs the last election when they won 3 seats, with a tough fight to secure any this time. While Fianna Fail may also struggle to replicate the seats they won in 2009.

Could fortunes change between now and the election?
Of course. Any poll is only a snapshot in time, and events can certainly change voter’s opinions, particularly when the individual candidates appear to be so important in terms of voters support. Many of the races are very close, so they is still plenty to play for.