I’m sure that the government were hoping for a reaction to their budget a week ago, but I’m pretty sure this wasn’t the reaction they were looking for.

Instead of garnering support of the electorate for the government parties, the budget appears to have triggered further growth in the popularity for the lead opposition party Sinn Fein. The party surges forward again in today’s poll securing 33% of the first preference vote, an increase of 4% support in little over a month.

Only last month the party led for the first time in a RED C poll.  Today that lead is significantly extended as the gains seen for Sinn Fein appear to be at the expense of the two largest government parties who both lose ground.

Fine Gael is the party that suffers most with a 3% decline in support, while Fianna Fail also drop back marginally by 1%.  For Fine Gael the further drop in popularity continues what appears to be an alarming downward trend for the party overall. Only back in June of this year they were securing 30% of the vote, a year ago during the initial response to the Covid 19 pandemic as a caretaker government they were securing 37% support, now the party are managing to secure just 25%.

This is a decline of 12% in just 12 months, and while the high was probably inflated by the “rally round the flag” effect in response to the pandemic, any peripheral gains are steadily being let go.

For Fianna Fail, 12% support is at the low end of where we’ve seen them polling this year. Their support has ranged from between about 11% to 16% in RED C Polls.  This is despite the fact that we ensure we have 23% who voted for the party at the last election in the sample.  A large cohort of past voters are simply undecided, while many have moved support to other parties including Fine Gael and Sinn Fein.

Historically, when Fianna Fail dominated the Irish political landscape, the budget would have acted as vehicle for to gain support from the electorate. With their coalition partner now in charge of finance, Fianna Fail must instead rely on impressing on both health and housing, of which both are of paramount importance to the electorate.

This negative reaction to the budget, appears to be underpinned by a significant concern among voters at the rising cost of living in Ireland, with 94% of those polled agreeing that they are worried about this.    Other indicators of financial concerns among the public are seen in their reaction to various parts of the budget. 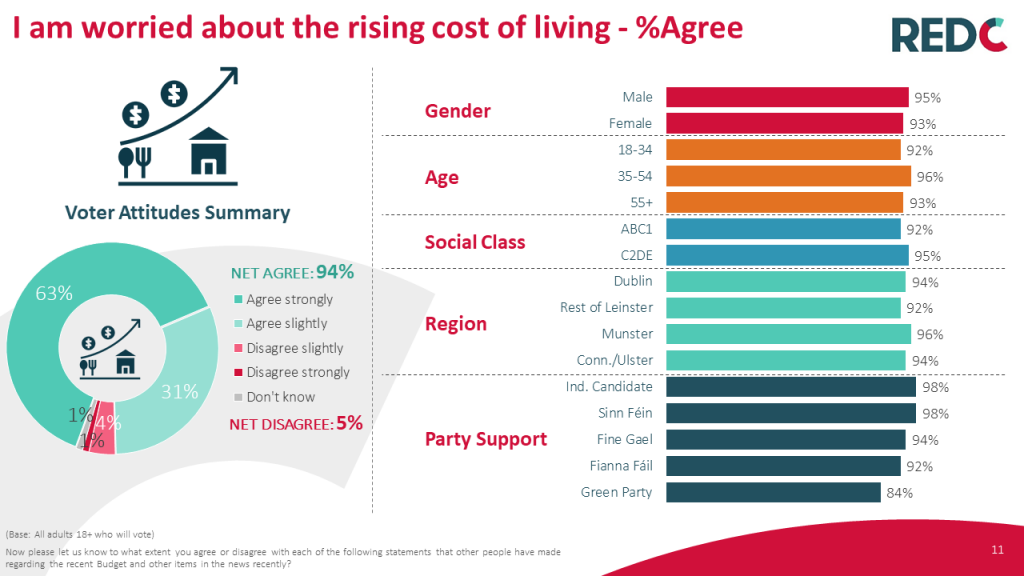 Only one in three (32%) think the government did enough to help with the continuing issue of childcare costs, while the majority (59%) don’t support the hiking carbon tax, even though most were in favour of this a year ago.  Most also think it was right for the government to introduce some tax cuts.   Put alongside the other responses, it is perhaps implied that maybe they were hoping for more.

This negative response to the budget, and a real concern about rising cost of living in Ireland is helping to boost the Sinn Fein vote. It certainly appears that the great majority of those from working class and the squeezed middle are swinging behind the party in greater numbers than ever.  Now almost half of those in less well-off social groups say they will support the party.

It might be expected, with news of record levels of savings by consumers during the pandemic, and the desire to treat very apparent as we come out of lock down restrictions, that people would not be as concerned about rises in the cost of living.

The reality is that we have seen a growing divide between the haves, the squeezed middle /have nots in much of the work we are conducting.  Those in the “have not” group are more likely to be grappling with high rents, high childcare costs and struggling to make ends meet. Any increase to the cost of living is potentially the last straw to them.

Based on this it is not surprising that one in three voters now suggest they will support the opposition in Sinn Fein, it is these same people that those most worried about the rising cost of living, the cost of childcare and the change in pension age.  A group who perhaps feel they are not understood or represented by the government parties and believe that Sinn Fein at the very least deserve a chance to close the gap between the haves and the have nots.

« Public anxiety grows over environment as COP 26 UN Conference looms large Support for the idea of a United Ireland, but not the Reality »
Top...
We use cookies on our website to give you the most relevant experience by remembering your preferences and repeat visits. By clicking “Accept”, you consent to the use of ALL the cookies. However you may visit Cookie Settings to provide a controlled consent.
Cookie settingsACCEPT
Privacy & Cookies Policy