The Brexit vote will take place this Thursday.  Trends in the polls in the past few weeks had seen a significant shift towards Leave, with the poll of polls suggesting the outcome could well be as much as 55% Leave and 45% Remain.  This trend has been seen across both Online and Telephone polls as we move closer to the day of voting, despite the fact that originally Telephone polls had suggested a leaning towards the Remain camp.  More recently the polls have suggested a swing back to Remain.

So are the polls measuring Brexit correct?  Or is there anything we can learn from Ireland, where the pollsters have had perhaps more experience of measuring Referendum than their near neighbours in recent years.

Detailed analysis of Irish referendum polling has uncovered two main features that can impact on the polls.  The first being the “status quo” effect, and the second the impact of “shy voters” on the outcome.

The status quo effect has been seen in almost all of the referendum polling conducted in Ireland over the last number of years.  This suggests that voters, if they are not 100% decided on how they will vote, end up voting for the option that means no real change to their own lives, when it comes down to making a decision in the polling booth. This can have two impacts on the polls as they currently stand.

The first impact is that it is very likely that those who currently tell pollsters that “don’t know” how they will vote, will ultimately vote for the status quo if they actually bother to vote at all.   The second is that, even if voters are telling pollsters how they will vote, but have any doubts on voting day, they are far more likely to end up voting for the status quo than otherwise.

In the recent Marriage Referendum almost all of those telling pollsters they were undecided in the final polls, appear to have voted No to changing the law and allowing same sex marriage.  If RED C had simply excluded undecided voters from our final poll before the referendum, we would have been predicting an 80% Yes vote.  As it was we argued that all the undecided voters would vote No, and published a final poll predicting 69% would vote Yes.

This phenomenon was also apparent in the Children’s and the Oireachtas Enquiries referendums, with at least 70% of undecided voters ending up voting for the status quo if not more.  An Irish Times/MRBI opinion poll taken in the week before the Oireachtas Enquiries referendum suggested it would be passed by at least 74% when undecided voters were excluded. A week later the referendum was defeated by 53% voting No and just 47% voting Yes.  Even if 100% of the undecided voters moved to No or the Status Quo, then the poll would still have only suggested 43% were going to vote No.  But at least it would have been significantly closer to the final result.

Learning – undecided or wavering voters are far more likely to vote for the status quo than for change, assuming they turn out.

Referendums can often be far more emotionally charged than political party elections.  With strong and emotive arguments being made on either side, voters can sometimes feel “shy” about expressing their opinions, particularly when it appears to be in the minority.

This was particularly evident in the recent Marriage Equality Referendum where many of those that didn’t want to see change happen felt somewhat compelled to silence by the overwhelming media support for Marriage Equality.  This meant all of the polls underrepresented their views.  In fact, even when allocating most undecided voters to the status quo, the final polls in Ireland were still at least 7% too positive for the Yes camp.

Only RED C, using a Wisdom of Crowds approach in an aim to overcome this shy voter effect, correctly predicted the result with 100% accuracy. 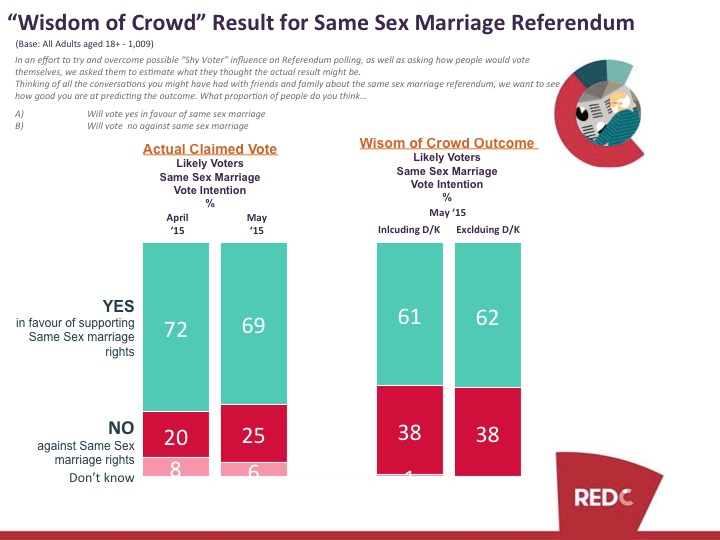 In the Marriage Referendum campaign the No side had not been strongly represented, with no political party on the side of the No camp, and the media firmly in the Yes camp. So it wouldn’t be a surprise if voters were “shy” about telling us they plan to vote No.

In our polls running up to the referendum we also saw that many voters claiming that they will vote Yes still had reservations about some of the claims being made by the No camp. To get behind this for our final poll, we used a Wisdom of the Crowd approach to polling.  As well as asking how our representative sample of voters will vote themselves, we also asked them what they thought the final result might be.

This aimed to take into account the conversations that voters are having with family and friends about the topic, and how they see people voting on Election Day. Once the 1% of don’t knows were excluded, this analysis predicted the final result with 100% accuracy! Suggesting that there was indeed a “shy No” voter effect in the standard poll analysis.

Learning – watch out for a possible shy voter effect on your referendum polling.

So how might these two referendum poll learning’s from Ireland impact on the UK Brexit polling result?

Firstly, it is clear that the status quo in this instance is to remain as part of the EU.  As such, based on this learning from Ireland, we might assume that a large majority of undecided voters in the UK Brexit polls that are still definitely planning to vote will end up voting to Remain.

What the UK Thinks, (http://whatukthinks.org) is a web site run by John Curtice, one of the most respected political scientists in the UK, in order to give an unbiased view of all the polling data available.  It runs a poll of polls analysis, using the most recent 6 polls from reputable polling companies in the UK.  At the time of writing (Sunday 19th June) it has the two camps neck and neck at 50% each.

Secondly, there is certainly potential for voters on one side or the other, in what has been a very emotive campaign, to feel shy in expressing their views on how they plan to vote.

RED C  has been working with partner pollsters in the UK in order to try and replicate the Wisdom of Crowds approach for Brexit, that RED C used in Ireland at the Marriage Referendum.  ORB International are the UK member of the WIN Gallup International network along with RED C.  In their Brexit polling they asked the exact same wisdom of crowd question used by RED C.

ORB’s topline published poll vote intention results on the 10th June showed 55% Leave and 45% Remain.   But the Wisdom question asked of the exact same voters suggested a 52% Remain and 48% Leave result was being predicted by their representative crowd as the likely result.  While this poll was taken some time ahead of the referendum itself and so can’t be used to predict the result itself, the difference between the wisdom prediction and the topline vote intention results suggest at that stage of the campaign that shy voters were more likely to be in the Remain camp.

More recent polling, in particular since the death MP Jo Cox, and the unveiling of Nigel Farage’s anti-immigration poster, has seen the wisdom of crowd question produces the opposite result.

In other words, as the topline vote intention poll results have moved more in favour of the Remain campaign in the past week, the crowd is suggesting a result that is far closer and even possibly in favour of Leave.  This may seem at odds with earlier results, but could also suggest a new underlying shy voter effect, this time among Leave voters who no longer want to admit to pollsters that is how they will vote as the media narrative possibly turns against them.

So how does this help us to predict the Brexit Referendum result itself?

We preface our conclusions by stating that of course no one referendum is exactly the same as another.  Having said that, if the same issues for the pollsters in recent Irish referendum are taken into account, then the current Brexit picture is possibly more positive for the Remain camp than the topline poll results suggest based on the impact of the “status quo” effect, but these gains could be balanced out by any underlying “shy voter” effect.

The “status quo” effect certainly appears to favour Remain.   In fact, the Remain camp could potentially secure as much as 55% of the vote based on polls to this date, despite only securing 50% of the poll of poll average at this stage.  Most recent polls released today also suggest a greater move to remain, which could push the Remain vote up to mid to high 50’s if the status quo undecided voter impact is at play.

This then needs to be countered with a possible “shy voter” impact in the opposite direction, potentially pulling the vote closer.

As we don’t have the full data itself from the polls, it is very hard to determine exactly how much impact each poll effect may have.  However to hazard an estimate of where the two factors might balance out I am suggesting a possible result that sees a Remain victory, in or around 53-54%.

Only time will tell if this analysis holds true and that the Brexit referendum has these two Irish referendum poll effects at play, in another country and a very different referendum, but it will be provide an interesting lesson for pollsters should this pan out.